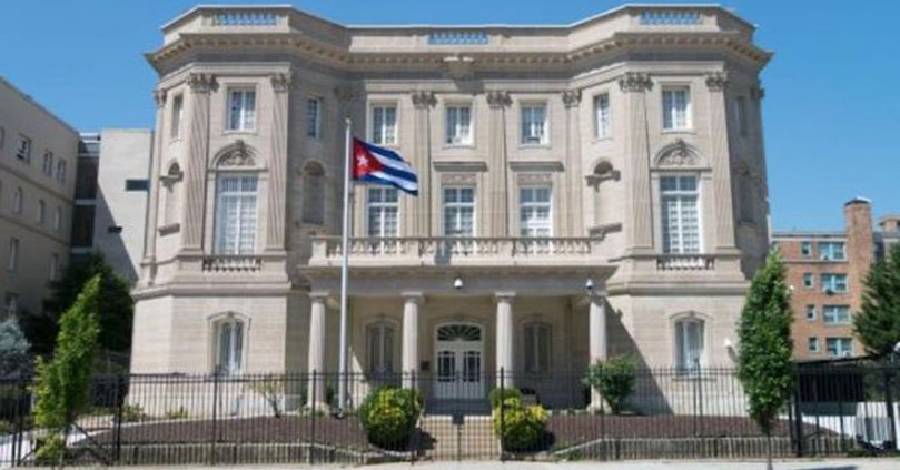 At two o’clock in the Morning on Thursday, April 30, there was a violent attack on the Cuban embassy in Washington DC. According to early reports from Cuban sources and from Washington’s municipal police, an individual drove up to the embassy, which is located on the Northwest quadrant of the U.S. capital, and opened fire on the building with a powerful weapon. Neighbors, awakened by the shots, call the police who have arrested a suspect whose name has not yet been released to the public.

Though nobody was injured, there was damage to the embassy building: A pane of glass above the main entrance was hit, and pillars that support the building’s portico were chipped by the bullets.

Cuban Foreign Minister Bruno Rodríguez immediately reminded the Trump administration of its obligations, under international law, to afford full protection against such attacks to all diplomatic properties of foreign countries in the United States.

This is an important reminder, because last year, the Trump administration incited, and connived in, an illegal takeover of the Venezuelan embassy, also in the Northwest Quadrant of the U.S. capital.

It is not yet known who, if anyone, was behind the attack on April 30. But the slanderous attacks of the Trump administration and its allies have reached a fever pitch. The propagandistic attacks on socialist Cuba are currently focused on trying to discredit Cuba’s highly respected international health solidarity work. Countries that Cuba has been helping to fight the COVID-19 pandemic, including such major ones as the Republic of South Africa, have also been the target of angry attacks by current U.S. government. The Trump administration has dismantled almost all of the advances in U.S.-Cuba relations that were achieved after the joint declaration of then U.S. President Barack Obama and then Cuban President Raul Castro Ruz in December 2014. Diplomatic relations still exist but most of the staff of the Cuban embassy in Washington has been expelled by the Trump administration. Economic attacks aimed at causing maximum hardship to Cuba’s 11 ½ million people are also being intensified.

The Communist Party USA denounces not only the attack on the embassy, but the whole direction that U.S. policy is taking toward socialist Cuba. We demand that city authorities in Washington D.C. thoroughly and transparently investigate the embassy incident and go after all individuals and organizations which were complicit in it. The U.S. and world public needs full access to all the facts.

But that is not enough. We denounce the Trump/Pompeo policy of economic, political and propagandistic attacks against Cuba that have been heavily influenced by far right elements in the old Cuban exile “diaspora” and the fascist fringe of U.S. politics.

We ask our members and all our friends to immediately contact the White House, the U.S. State Department and the Washington D.C. municipal government and police, to demand an end to all incitement, provocations and attacks against Cuba’s embassy and its personnel.

We urge our friends around the world to condemn this situation and to contact United States embassies and consulates in their countries to denounce the attack on the embassy and the vicious anti-Cuba policies of the Trump administration.